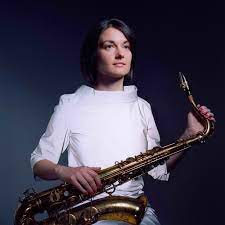 The prolific and versatile British saxophonist/composer Trish Clowes has been described as ‘an improviser to be reckoned with’ (Downbeat Magazine) and ‘one of the most agile and original jugglers of improv and adventurous composition to have appeared in the UK in recent times’ (The Guardian). She has written for ensembles as substantial as the London Sinfonietta and the BBC Concert Orchestra whilst her eloquent and refined work with smaller groups has won her widespread critical acclaim. Her recent (7th) album – A View with a Room –  was described by The Guardian as ‘a rich mix of cinematic landscape evocation, funky guitar grooves, dreamy reveries spun off minimalist patterns and fluently unclichéd improv’.

Ross Stanley is one of the UK’s leading jazz pianists and organists, known for his flowing and lyrical playing. He regularly performs with musicians including Dennis Rollins, Guy Barker, Joel Frahm, Liane Carroll, Stan Sulzman, Steve Arguelles, John Paracelli, Bobby Wellins and Clark Tracey and is a regular member of the Jim Mullen and Nigel Price Organ groups.

‘With her astringent tone and flexible take on harmony, Clowes delivers stimulating explorations’